Running 4 the Dogs and Cats

Challenging years take stamina and strength, so does running a marathon. As does rescue from a slaughterhouse and campaigning for change. That’s one thing we all have friends. Loyal and faithful, just like the dogs and cats we love so much – we are there for them come rain or shine.

Today, 4th October is the 40th London Marathon with a difference. Runners can take part worldwide. We have seven incredible souls in our team. It is the first time ever such a race will take place, and more importantly, the first time the NoToDogMeat message will emblazon their shirts—such a great way to raise awareness and funds.

As many of you know, we have been struggling with transport at our shelter. Our ancient van often breaks down, and government restrictions often mean we can not use it to go to the animal hospital and city. That makes it hard to get supplies. A few months back, Anna (18) walked 5 km carrying poor Michael from the shelter to the nearest road.

We know you all have your special reasons for following our campaign and supporting us here are some of the reasons our runners are braving the rain and heat, depending on their location, to make a difference.

NoToDogMeat works with people who want to make a change in countries which still have a dog and cat meat trade.

The charity helps campaigners rescue animals, set up shelters and lobby governments to end cruel practices which are fast becoming unacceptable to many people in those countries.

This year the London Marathon is very different, and in the capital on the day there will only be an elite race due to the Coronavirus pandemic.

However, thousands of people across the globe are still running a marathon distance on routes local to them, including two of Kaja’s NoToDogMeat teammates, who are running in China and Australia.

Kaja Lukaszewicz, 45, is a professional dog walker who lives in London. Kaja is running this year’s marathon to raise money for the NoToDogMeat charity.

Speaking about her reasons for choosing NoToDogMeat as the charity which will benefit from her efforts, Kaja said: “I grew up with dogs and they have been my lovely companions for all my life. “I cannot see dogs, or any other animals as a food. This is wrong and I strongly disagree. I love that NoToDogMeat is trying to break those cruel ‘traditions’ and save dogs and cats from meat farms.”

Kaja has worked hard to prepare for the challenge, and hasn’t let the Coronavirus lockdown get in the way of staying fit and active. She said: “I did run the London Marathon in 2015 and couple more. “This year is different but I honestly think it’s also special. I am staying active, though I must admit – I am not a great runner, but that is why I signed up – this is a big challenge for me, and I like challenges. Yesterday me and Bryan appeared in BBC1 news – he is a real star – I am only a runner!”

Giving advice to anyone who is thinking of taking on a marathon challenge of their own, Kaja added: “Go for it! This is one of the adventures you will remember, and great for your mindset. You can also help raise money for very important causes. You have nothing to lose, but a lot to gain.”

If you agree with us – please donate – together we can make a difference and change fate of many dogs and cats!

To sponsor Kaja in her Virtual London Marathon challenge go to: https://www.totalgiving.co.uk/mypage/kaja_ami_bryan

Teri is going to run in Perth, Australia. She has managed to engage with pet shops to sponsor her to run. She will be one of our first runners to complete the course. Teri first found out about our campaign on social media and decided she wanted to help. It is so incredible to know our supporters really do span the globe.

Teri said: “I’m not sure of my route yet; it depends on the weather – spring here, so if it’s warm I’ll be running wherever the shade is for 42.2 km!  We have some lovely running paths around Perth city, so I will probably stick mainly to those.   I prefer to run by myself (I have a crew supporting me though) as it’s going to be a pretty long outing due to lack of training time on my part.  My first marathon; I did run a 10k earlier this year but no further.  So I’ll be walking most of it.”

Polish-born Denis has been living in Shanghai for the last four years. He was so shocked to find out about the dog and cat meat trade he has decided to run in the middle of China’s big Golden Festival along the banks of Shanghai.

He said: “I am going to try to record it on a GoPro and share it on YouTube to spread the word about NoToDogMeat”

His run will start at midnight UK time 7 am Shanghai.

To sponsor Denis go to: https://www.totalgiving.co.uk/mypage/runforavan

A brave dental nurse is taking on this year’s Virtual London Marathon to raise much-needed funds to help save dogs and cats from the meat trade. Gorgeous Gretchen Wild, 43 from Essex is a massive cat lover who has four purr rescues. She knows we fight as much for cats as we do for dogs.

Gretchen said: “I am an avid animal lover as well as being a vegetarian. It breaks my heart that animals are treated in such a cruel, sadistic manner and I want to do all I can to help support such a worthy cause and the fantastic work the charity carries out to help stop this vile cat and dog meat trade. I only support animal charities which is why I have over 20 direct debits every month to various animal charities around the world. I currently have four rescue cats at home and have always had rescue cats and dogs for as long as I can remember since I was a child.”

And supporting animal rights charities runs in the family, Gretchen’s fiance is also running the marathon, for The Blue Cross.

Gretchen said: “Because he is taking part in the virtual race I am going to run with him and therefore want to take this opportunity to raise funds myself for my chosen charity which is NoToDogMeat. We have been training together either running locally to where we live or at the gym now it has re-opened.”

All the couple’s friends and family are all right behind their athletic fundraising efforts: “We are a family of animal lovers and my friends are used to me doing sponsored walks and car boot sales to raise money for animal welfare charities.” said Gretchen.

And giving advice to anyone thinking of taking on their own marathon challenge in the future, Gretchen added: “Start training early and a plant-based diet is essential for your fitness, health as well as the environment. The marathon is very different this year because of the pandemic and on the day we will run using an app to track our distance and time. You are able to run wherever you prefer to, in your own time as long as it’s within 23 hours, 59 minutes and 59 seconds!”

Here’s Gretchen’s very personal message of why she is running and her fundraiser on her personal video: https://www.justgiving.com/fundraising/gretchen-wild 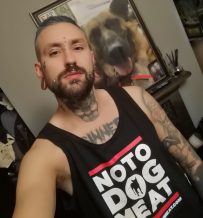 Patrick is a vegan from London. His message is one of kindness for all animals, and we agree. Patrick plans to run with his German Shepherd Rescue Tequil, who will sport our shirt. His friends will support him and collect donations on the route and hand out flyers.

Patrick said: “I will be run first 1km with my baby Tequila (german shepherd girl) she wants to help her brotherz and sisters as well and I can’t wait! It sounds really great and it will be an honour to run with your vest!”

A brave project manager is taking on her first ever London Marathon to raise money for a cause that is close to her heart.

Claire Biggs, who lives in Malmesbury always felt a particular affinity with animals, and after seeing videos of the barbaric torture of dogs and cats in countries which still consider them to be food, she knew that the NoToDogMeat charity would be her cause of choice.

Claire, 38, who works for Dyson, said: “My family are often more into animals than some people, the thought of them being treated like this in parts of our world upsets me.

“My beautiful friend Sarah was running the marathon and we were going along to support from the sidelines. Now it is being run like this my friend Jess and I wanted to continue to support Sarah so we agreed we would all run and walk this together. My family and friends are really proud and are all hoping to support on the day with refreshments and cheering along the way.”

She added: “We are planning on splitting it between running and walking, Jess is in charge of the route and she is working on one that gives us varied landscape to keep us sane.”

And offering a little bit of advice to anyone thinking of taking part in their first marathon, Claire added: “I would have made the decision a lot sooner so I had more time to prepare!”

Claire isn’t going to let injury put her off running in Wiltshire UK. She is new to training as she signed up late to our appeal but says she is determined to finish the 49+ km walking and running even if it rains (which it will). Her lovely elderly dog will be waiting for her at the end of the race.

To sponsor Claire in her marathon challenge: https://www.totalgiving.co.uk/mypage/clairebiggs\ 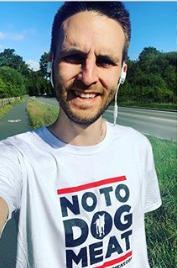 Stuart was our first marathon runner to sign up. He was due to run in the main race before it got cancelled, but he did not give up and continued to train during the lockdown.

Stuart will be running tomorrow in Devon supported by his family.

He has convinced his employer to match his fundraising efforts and will also represent us in 2021.

To sponsor Denis go to: https://www.justgiving.com/StuartAbbott

We are all so grateful. Our rescuers and shelter team in China are overwhelmed by their kindness and yours.

If you want to take part in future events please contact us, buy a shirt or a hoody or car sticker.

Good Luck to our Runners. Send us your messages of support for them and please follow us on social media.

We won’t stop until the cruelty ends! #NoActionTooSmall

To find out more about NoToDogMeat and learn how you can help go to NoToDogMeat.com 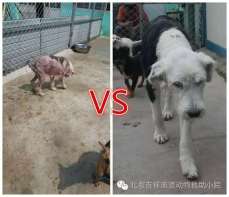 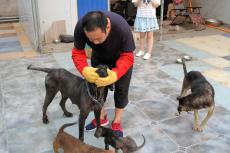 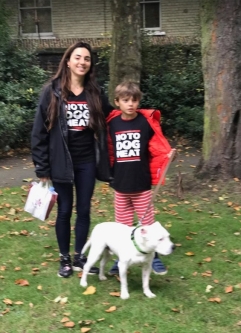 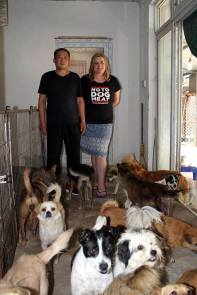 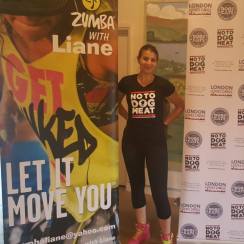 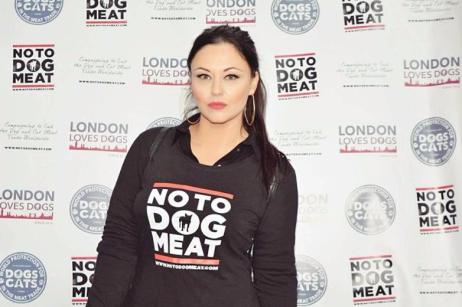 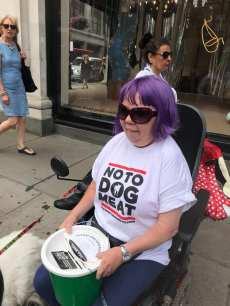 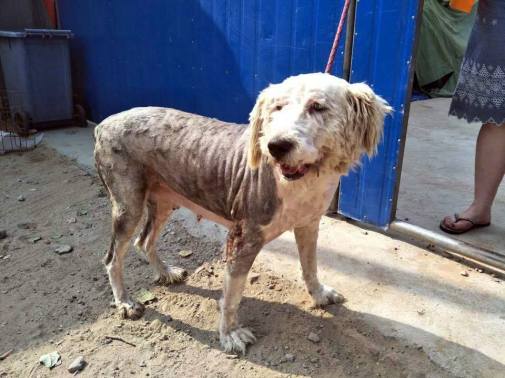 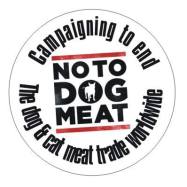 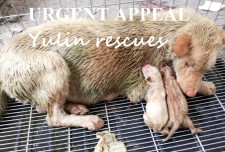 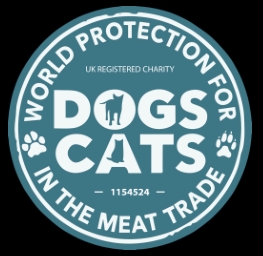 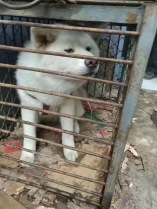 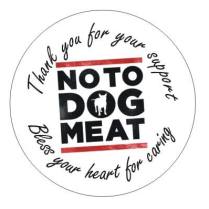 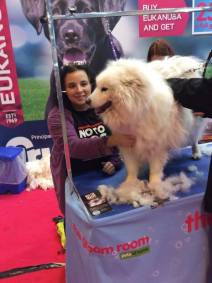 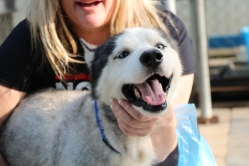